Do poison pills work? A finance expert explains the antitakeover tool that Twitter hopes will keep Elon Musk at bay

Takeovers are usually friendly affairs. Corporate executives engage in top-secret talks, with one company or group of investors making a bid for another business. After some negotiating, the companies engaged in the merger or acquisition announce a deal has been struck.

But other takeovers are more hostile in nature. Not every company wants to be taken over. This is the case with Elon Musk’s US$43 billion bid to buy Twitter.

ward off such unwanted advances. One of the most effective anti-takeover measures is the shareholder rights plan, also more aptly known as a “poison pill.” It is designed to block an investor from accumulating a majority stake in a company.

Twitter adopted a poison pill plan on April 15, 2022, shortly after Musk unveiled his takeover offer in a Securities and Exchange filing.

I’m a scholar of corporate finance. Let me explain why poison pills have been effective at warding off unsolicited offers, at least until now.

Poison pills were developed in the early 1980s as a defense tactic against corporate raiders to effectively poison their takeover efforts – sort of reminiscent of the suicide pills that spies supposedly swallow if captured.

There are many variants of poison pills, but they generally increase the number of shares, which then dilutes the bidder’s stake and causes them a significant financial loss.

Let’s say a company has 1,000 shares outstanding valued at $10 each, which means the company has a market value of $10,000. An activist investor purchases 100 shares at the cost of $1,000 and accumulates a significant 10% stake in the company. But if the company has a poison pill that is triggered once any hostile bidder owns 10% of its stock, all other shareholders would suddenly have the opportunity to buy additional shares at a discounted price – say, half the market price. This has the effect of quickly diluting the activist investor’s original stake and also making it worth a lot less than it was before.

Twitter adopted a similar measure. If any shareholder accumulates a 15% stake in the company in a purchase not approved by the board of directors, other shareholders would get the right to buy additional shares at a discount, diluting the 9.2% stake Musk recently purchased.

Poison pills are useful in part because they can be adopted quickly, but they usually have expiration dates. The poison pill adopted by Twitter, for example, expires in one year. 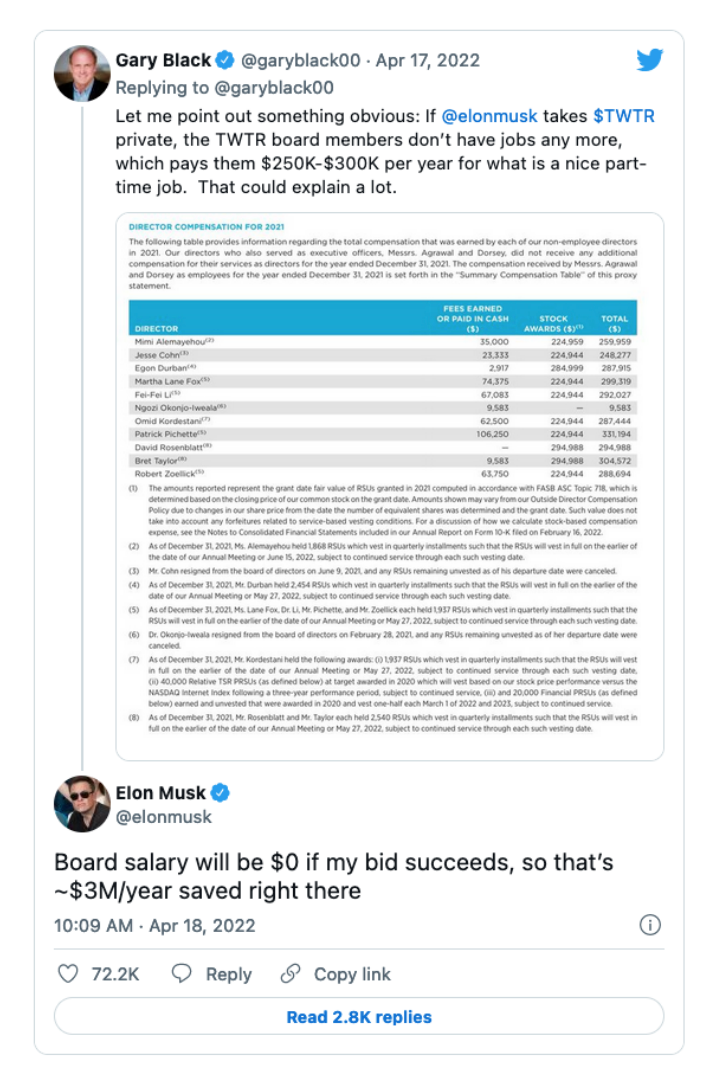 No one has ever triggered – or swallowed – a poison pill that was designed to fend off an unsolicited takeover offer, showing how effective such measures are at fending off takeover attempts.

These types of anti-takeover measures are generally frowned upon as a poor corporate governance practice that can hurt a company’s value and performance. They can be seen as impediments to the ability of shareholders and outsiders to monitor management, and more about protecting the board and management than attracting more generous offers from potential buyers.

However, shareholders may benefit from poison pills if they lead to a higher bid for the company, for example. This may be already happening with Twitter as another bidder – a $103 billion private equity firm – may have surfaced.

A poison pill isn’t foolproof, however. A bidder facing a poison pill could try to argue that the board is not acting in the best interests of shareholders and appeal directly to them through either a tender offer – buying shares directly from other shareholders at a premium in a public bid – or a proxy contest, which involves convincing enough fellow shareholders to join a vote to oust some or all of the existing board.

And judging by his tweets to his 82 million Twitter followers, that seems to be what Musk is doing.

Disclosure statement Tuugi Chuluun does not work for, consult, own shares in or receive funding from any company or organization that would benefit from this article, and has disclosed no relevant affiliations beyond their academic appointment.